A short history of running on the roads

The total length of Britain’s road network today is a staggering quarter of a million miles. That’s about the same distance as from the Earth to the Moon. For many runners, this immense web of tarmac provides the perfect place to practise their sport; roads offer an almost endless choice of smooth, firm and clean surfaces that are easy to access and free to use. Looked at like this, it’s not difficult to see why in Britain today, more people run regularly on roads than on any other surface. Indeed, runners are so ubiquitous on the streets of modern towns and cities that it can come as a surprise to discover that for decades prior to the ‘running boom’ of the late 1970s running on the pavement was regarded as at least eccentric and, as we shall see, sometimes even as deeply suspicious. And yet, by looking further back in time it’s possible to trace a much deeper history of running on the roads. The status and motives of road runners may have changed over the years, but in one shape or form running has been an important part of street life for centuries. 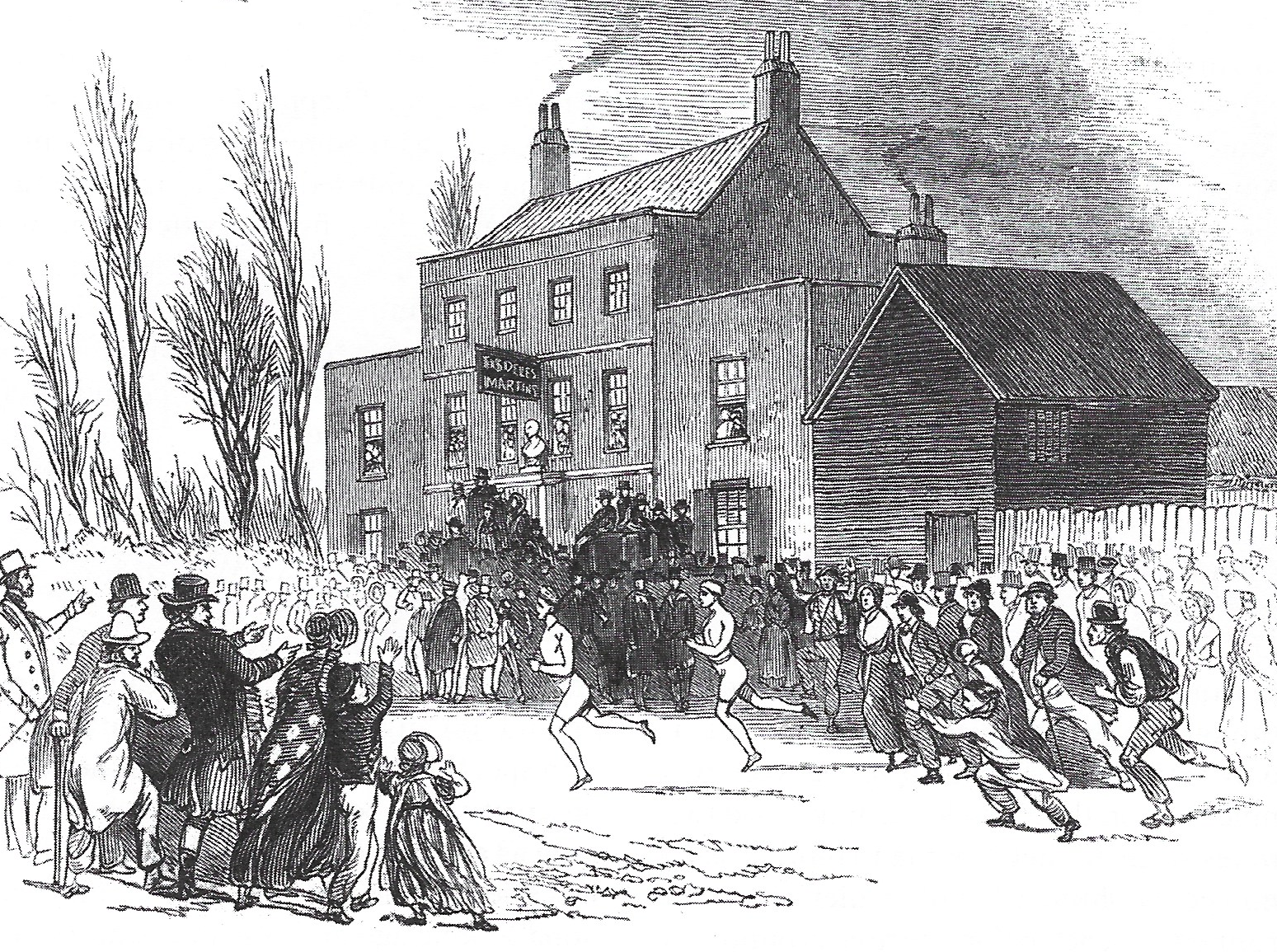 The glamour boys of the road

In the days when long-distance travel meant struggling along badly maintained dirt roads and pony tracks, messengers on foot could often outrun riders on horseback, and were long employed by the wealthy to carry messages and run urgent errands. From around the fifteenth century, however, this role began to evolve in its responsibilities and status as a new, specialist type of servant, the ’running footman’, began to emerge.

Becoming a running footman offered hundreds of men not only a good living, but also a chance to climb the social ladder. Their job was to accompany their masters and mistresses on the road, running beside or ahead of the dignitary’s carriage to clear the route of debris such as stones and branches and to prepare lodgings and refreshments in advance. The appearance of running footmen at a coaching inn or roadside tavern was cause for the landlord to celebrate - it heralded the arrival of important and wealthy guests.

Running footmen were highly visible extensions of their master’s power and personality. So, in keeping with the norms of conspicuous consumption, they needed to look good. The better dressed, taller and more handsome your footmen were, the better it reflected on you. Inevitably, footmen became famed for their good looks, expensive clothes and youthful vigour. With their physical appeal and relatively high incomes it’s hardly surprising that footmen quickly gained a reputation for fast living and leading young girls astray. Not everyone can have been pleased to see half a dozen of these puffed-up young men swaggering into town.

One can imagine that footmen, embodying their patron’s prestige and full of youthful confidence, commanded respect on the road. They were there to get other road users out of the way – and would often have taken a high-handed approach in dealing with any of the little people whose trundling waggons or slow-moving animals might present an obstacle to their master or mistress’s swift and dignified progress. As proxies for their powerful employers, these high-status runners ruled the road.

But as roads improved during the eighteenth century, footmen became less useful. Carriages could travel quickly and reliably along well-made and maintained roads, and the dazzle of the footmen gradually faded from the highways. However, whilst spelling an end to the era of the footmen, these fine metalled roads presented new opportunities for fast runners, some of whom would earn even more money and adulation than their glamorous predecessors.

Racing on the turnpikes

In the late eighteenth and early nineteenth centuries, gambling was a mania that afflicted everyone from factory workers to royalty. The fast-industrialising towns with their swelling populations created new opportunities for entrepreneurial bookmakers, who organised a wide range of sporting contests to feed the demand for events to bet on.

Amongst the most popular of these were footraces, which took place over a wide range of distances, with runners competing for pre-arranged stakes. Spectators flocked to watch the races and bet on their outcomes. There were fortunes to be made, and not just for the punters. Top runners could use the sport to find a way out of poverty and to become respectably wealthy in just a few years. Newspapers covered major races and enormous crowds of ten thousand or more turned up to watch the biggest names in action.

The new turnpike roads provided the perfect venues for these races. They were well-made, of measured distance, and the toll booths could be closed to prevent traffic using them during the race. They were also often close to big towns, so were easily reached by the hoards of spectators who made the races so lucrative for their organisers.

The old turnpike races could be seen as precursors of today’s road races, although they rarely involved more than a few competitors – often just two runners took part. But in terms of atmosphere, they seem to have been very different. Reports of races from this period often describe rowdy affairs, with drinking, race fixing and even stray dogs on the course leading to arguments and even hooliganism.

Far from the polite and supportive crowds that clap every competitor at road running events today, the masses who lined the turnpikes two hundred years ago were partisan, invested, possibly drunk and potentially violent. As the stifling moral climate of the Victorian Age descended, this volatile but colourful cocktail of running, roads, betting and alcohol was deemed a problem that needed to be fixed.

From the mid-nineteenth century, the popularity of running led to the building of purpose-built tracks where spectators were guaranteed a good view of the action and could be charged accordingly. Increasingly, such venues – both outdoor and indoor - housed the biggest races.

This trend was amplified by the emergence of amateur athletics. Upper- and middle-class Victorians had developed an increasing distaste for gambling and ‘excesses’ of all kinds, helping to drive the emergence of this new form of running that expressly banned betting and all types of professionalism, which were thought – with some justification - to encourage cheating and the throwing of races, as well as crowd trouble.

Amateur athletics turned its back on the city streets and turnpike roads, and retreated to its own highly sanitised, socially exclusive, perfectly measured and evenly surfaced little worlds. The standardised running track emphasised the rationality of the new sport as well as its disconnection from the day-to-day, worldly concerns that dominated everyday life.

For upper-class Victorians, the move off the roads felt like progress; the street was a place for going about your business or for dignified promenading, not for sprinting and sweating on. The track provided them with the kind of rarefied, controlled and private space to enable them to lay claim to athletic excellence without having to mix with too many (often faster) runners drawn from the lower orders of society.

Even in the 1960s, pavements remained places where restrictive norms limited the level and types of physical activity that were considered acceptable. Runners of this decade report being harassed by the police, who were convinced that an adult running down the street could only be up to no good! But a rising awareness of the need to be physically active to avoid an early death from diseases linked to inactivity would soon lead to change.

Jogging was just one of a multitude of exercise regimes that swept a suddenly health-conscious America in the 1960s. Perhaps because it was so simple - and so well marketed – it took off rapidly, with the first organised jogging programmes attracting thousands of people almost immediately.

Reflecting the behavioural codes of the time, the first jogging groups were run at athletics tracks rather than on the roads. But the sheer number of these enthusiastic new joggers, their geographical spread, and the increasingly informal culture of 1960s America meant that runners increasingly took to the roads to get their jogging fix.

Jogging was largely a metropolitan phenomenon at this time, and spread rapidly through American and European cities during the 1970s. Keying into the new mania for running, many now famous city marathons were inaugurated at this time. Urban runners, who had once been viewed with suspicion or as oddballs to look down on, were beginning to take over the streets.

Indeed, if anyone was looking down on anyone else in the cities of the 1970s and early 1980s, it seems it was road runners who had gained the upper hand. One commentator described how some runners “look down on other people, thinking of them as bad, lazy, indolent, immoral”, another described how runners had become a “physical elite” who swaggered around metropolitan centres in a uniform of “satin, terry towelling [and] running shoes”. By the 1980s, runners had become an assertive and accepted part of the pedestrian traffic of our towns and cities.

Since the early days of the running boom, the number of runners and joggers on our streets has only increased. Yet, despite their huge numbers, runners remain a low priority in urban planning. Falling somewhere between the better served groups of walkers and cyclists, they need to negotiate an infrastructure that has been designed without them in mind.

However, a new generation of urban planners, campaigners and academics are beginning to change all this, with a big push to make cities more ‘runnable’.

Already, running is providing a flexible, free, practical, healthy and environmentally friendly way of moving about our towns and cities that many are making the most of. And the more of us who turn to running as a way to accomplish our day-to-day tasks - to get to work, the shops or the gym - the more it will be seen as an important and investable form of urban transport rather than just as a sport or form of exercise. This would be good news for runners, for their cities, and for the planet as a whole.

So why not get involved? The #RunSome campaign encourages you to think about the way you get around, and to replace some of your shorter day-to-day car journeys with runs. You can help create the change you want to see in your town or city simply by following in the footsteps of history’s illustrious rollcall of pavement pounders, and taking to the streets!